"The Magician's Study does what all good magic is meant to do; it confuses delightfully the fixed categories of our mundane world in order to make a space for wonder. Impossible things become possible before your eyes." -- Michael Martone 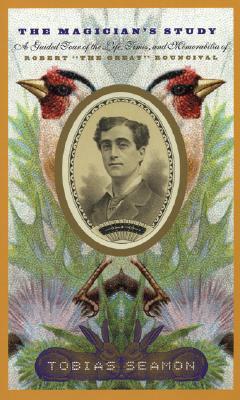 "Passing itself off as the spiel of an articulate tour guide, Seamon's ingenious first novel takes the reader on a guided perambulation through the study of fictional Jazz Age magician Robert "The Great" Rouncival. With the presentation of each piece of memorabilia, another episode from the late magician's life is revealed, from his youth in upstate New York to running away to join a ragtag carnival to his rise as an eccentric, often devilishly macabre illusionist in Manhattan's licentious Bowery during the Roaring Twenties. Sharing in Rouncival's fortunes and frequent setbacks is Sherpa, a reformed Cuban pirate and, like his master, an inveterate ladies' man. Together the two craft stunning illusions, romance a famous heiress, achieve worldwide fame, and rub elbows with the likes of Dutch Schultz, Frida Kahlo, and the most notorious magician of all, Houdini. Seamon's stylistic inventiveness and skill with memorable characterizations are nothing short of breathtaking. Rouncival and his colorful entourage herald the arrival of a major new talent."

"Required Reading -- Take a whirl through the Jazz Age and the enchanted study of an all-too-human magician as he finds fame and succumbs to the darker charms of magic."

"This enchanting debut novel conjures up the world of smoke and mirrors; a world of fame, fortune, power ... fans of Robertson Davies will be charmed.

"With such a cast of characters, Seamon can hardly go wrong. Imagination carries his story along at a crackling clip."

"...Seamon's novel invites readers to partake directly in the story, one disguised as a tour of "The Great" Rouncival's study. As items in the room are discussed, the tour guide slowly reveals Rouncival's life, pausing often to address the tour group and comment upon their reactions to his stories, and what a story it is. Rouncival began in a seedy carnival only to become one of the most famous illusionists of the 1920s. Along with his assistant, Sherpa the Silent, a pirate from Cuba, he created an act of dazzling achievement that left audiences gasping. Rouncival kept company with Houdini, H.G. Wells, and Frida Kahlo and wined and dined the best and brightest of the era. Set against a backdrop of a detailed Manhattan-particularly the Bowery-and infused with the city's history, the novel seduces as it explores, not only the deeds of "The Great" Rouncival, but also the world he occupied. While the real magic in this book is the writing style and imagination of Seamon, spending time touring Rouncival's study weaves a definite spell."- Library Journal

"...a fantastic story; the kind that lures the reader in quickly and then holds him until the very end." -- Bookslut.com

"...one of those novels that is such a page-turner you wind up racing through it and then are sorry you did because the fun is over much too fast." -- Hudson Valley Magazine

"A bravura performance...this novel draws you deeply into a fabulous life of illusion, sleight of hand, and scary but luminous magic." -- Metroland

"...a sparkling tour de force. Rouncival's brief life is woven seamlessly into the actual theatrical history of his times and he emerges as real as Houdini and far more dazzling." -- Eugene Mirabelli

"...a hilarious and captivating account of the escapades of a dangerously charming Jazz Age illusionist, flimflam artist and inebriate philanderer." -- Albany Times Union